While I’m speaking of portraits anyways. Here’s a bit more about that.

Just like any other realism, portraits isn’t something that I’ve spent much time practicing. I recall making some pencil-sketch of Helena Bonham Carter for an art-assignment in elementary school, and a tiny drawing of my grandparents from the same time(which is still displayed in their house, and I’m horrified by it whenever I visit). Since then, I can’t remember making any portraits.
But then, the commissions came, and suddenly I had requests for portraits, even though I didn’t even have any in my portfolio.

Like other commissions involving photographs, it’s often more about artistic interpretations rather than depictions. Mostly it’s family portraits in a cartoonish style, and they turn out looking something like this ————————————————————>
Making a portrait this way is tricky. Even if it’s just a simple figure, I must put a lot of thought into where the facial features go, to both match the style, and have the drawing resemble the person.
Still, it’s nothing compared to a real portrait.
One tiny line in a wrong place can mess up a whole face. You’ve probably seen portraits that are good, but there’s something really creepy about them that you can’t put your finger on. Yeah, that’s just an eye in a slightly wrong angle or a mouth a tiny bit too big.

My first portrait was a pencil sketch of leonard cohen and two others. I was so scared about messing up, but this was just the rough sketch, and the client was so happy with it, they didn’t even want me to finalize it. I’m not too proud of it myself, but you don’t tell your boss that you disagree when they say job well done. So here’s how that turned out. 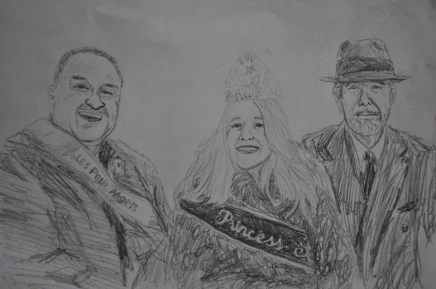 Then it was this cool old cowboy who needed an image for the articles he wrote for a newspaper.
It was my first ink portrait and ink can not be erased (obviously), so if I messed this one up I’d have to start all over. But it turned out fine, and I must say, the shirt was actually harder than the face on this one.

Then came along something much much scarier. On my fiverr-page I offered creating pictures in coffee. I thought I would reach coffee-shop-owners who wanted something fun to hang on their walls. But instead, it was coffee-loving people wanting portraits. And omygoshyouguys, that was the real challenge. Coffee is so hard to control, it’s sticky, it runs away to places it shouldn’t be and it takes forever to dry. I spent so many hours on these compared to what I would with any other medium.

I see I switched scanners around here. Believe it or not, that’s the same kind of coffee. 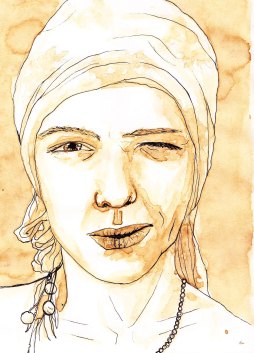 I really like these two. I’m happy about the roughness of the left one, and for the right, I’m just glad I managed to make a good one out of both coffee and ink.

After that, my first portrait in watercolor and ink. Scary as usual, but here I had started gaining some confidence in this area.

And lastly, the ones in only watercolor. I am super happy about these, and don’t even hesitate to make them anymore. The first I made was of Darwin, which was great, because that guy is recognizable as long as there’s a big beard and bushy eyebrows, so it was hard to mess up, even if I was making a color portrait after a black and white photo.

This little lady you’ve seen before

And this latest one, which I’m really proud of, even though the dog looks crazy.
I promise, it looked crazier in the photo.

Yeah. Watercolor is obviously my medium. Maybe I should just stick to that instead of stupidly messing around with that ink and coffee.

I hope you enjoyed these. And if you didn’t, at least now you know where not to go for a pencil-portrait.

Have a great day!